A lot can change in a week. 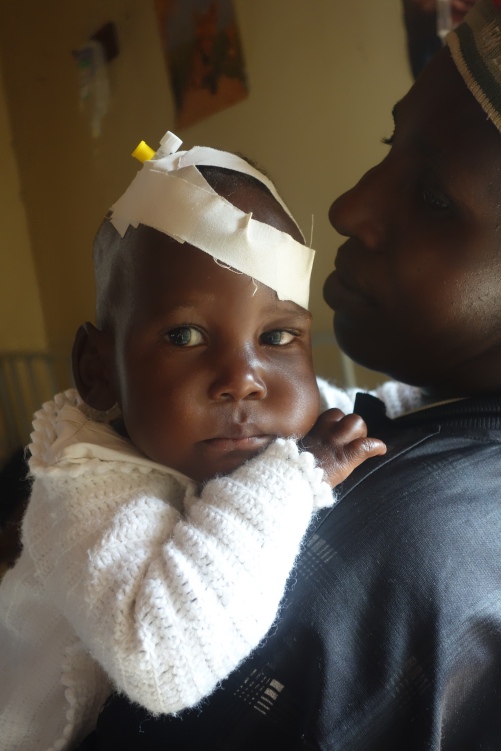 This little person with big cheeks was not very happy to be admitted to hospital today!

When I boarded my flight in Adelaide on Thursday, travelling to Uganda where the not-fot-profit Hospital my husband and I established 10 years ago is located, I wasn’t overly concerned about Coronavirus. I wasn’t too anxious about what the current state of affairs may mean for my time in Uganda or to be honest, the world at large. The talk amongst my circles was primarily that the media had been ‘sensationalising’ coverage for weeks, leading to a moral panic and in some cases racism. Cases in Australia were low, and my region had (to my knowledge) no community transmission.

By the time I arrived in Dubai, new measures were being put in place. It seemed overnight not just Italy but now the whole of Europe was erupting with cases. On the departure board when I stepped off the plane, people gathered around to see the flights canceled. Going through security, regular announcements were made by staff, alerting travelers who were transiting through Europe to the US to rebook via different routes. The day I arrived in Uganda, the Australian PM introduced self quarantine measures for all people entering Australia.

A few days earlier Uganda issued quarantine measures for people travelling from 17 different countries, leading to a situation where I was 1 of only 3 Anglo-saxons on the very empty flight to Entebbe. Arriving in Entebbe, many Ugandans were surprised to see me. The customary handshakes that last the whole conversation which I have grown to love, were absent. I felt under-suspicion, a potential carrier of this much-feared pathogen.

My choice to use social distancing while here, just in case, has been appreciated by Ugandans but it has also been met with amusement. For this glorious time, the disease has not risen out of deepest darkest Africa. Africa is largely safe, while the rest of the world is plagued (literally) by this virus.

Honestly? I have found it difficult to arrive at the decision that I need to come home early. There is valuable work to be done while I am here, and I wanted to use this trip to have as many useful conversations as possible. My heart (as always) is torn between the needs of Maranatha Health, and my own need to be with my kids as the world rapidly changes. I am unsure if flights will be canceled, if airports will be shut. I am hoping that I don’t pick up a simple cold virus while here (which is a distinct possibility considering it is the wet season and I am working in a kids hospital!) because I worry I won’t be allowed on the plane. The idea of further separation – beyond 2 weeks – from my still-young children is like a hovering dark cloud over my time here, yet it feels like an extremely superficial concern considering the state of our world right now.

These are all my own small personal anxieties, none of which effect quality of life to any significant degree for me.

The desire to curb the spread, to ensure our health system won’t be overwhelmed, is a noble one. But listening to discussion happening in Europe (and now Australia) regarding the ethics of treatment when there may not be enough ICU beds – has again exposed the deep chasm in our world, between those who have money and access to health care, and those who do not.

Health economics, and the perplexity of treating patients when there are scarce resources, is not a discussion topic I am new to. In fact, working for MH for the better part of a decade, it has been our lived reality. Uganda has around 0.09 doctors for every 1000 people – compare this to Australia, whose ratio is 3.59 doctors per 1,000 people.  Currently Uganda has 55 ICU beds, mostly reserved for the very wealthy. Whilst for most in the West these conversations about overloaded health systems remind us of surreal, post apocalyptic scenarios we may have watched in B-grade movies, for me they conjure up our dining table in remote Kamwenge, Uganda, my feet tapping with frustration on the cold concrete floor.

The stale air of a warm rainy-season night

The smell of cooking fires from across the valley

The crunch of grass underneath feet as our security guards diligently watch over the hospital premises.

And Michael and I, in our late 20s, in passionate debate over the ethics that confront us in our management of the rapidly growing demand at our hospital: patient protocols and reasonable resources and especially-needed equipment and an overcrowded ward with far more patients than beds.

Should we stand by the ethics of the greatest good for the greatest number, or the dignity of every life, or first in first served, or prioritize the poorest, or the youngest, or the ones with the greatest chance of survival? What is the right thing to do?

These considerations did not begin with Covid 19. And they are not conversations that only happened hundreds of years ago before the introduction of modern medicine. These are the lived realities everyday for the heroic health workers in the majority of the world.

These are conversations that happen in this era, in this world, in this time.

Even today at the hospital, we were discussing some challenges with the MH solar system with an electrical engineer. When mains power goes out (which it does regularly) we have been overloading our solar system, causing some batteries to swell. We need to replace these batteries, and add more, but the costs are prohibitive to us right now. Alternatively, the expense of running our big noisy generator through long breaks in power is also incredibly high. The other option is to cut down on some key equipment when power is off. The options when the power goes out are to cut back on: essential lab machines that help us with accurate diagnosis; a refrigerator that keeps much needed blood required for transfusions cold; or the life-giving oxygen concentrators that are drawing a LOT of power. If we only used one concentrator at a time (we have five) the system wouldn’t overload. But during busy periods, or after surgeries, we might have 4-5 kids who need oxygen.

The ICU discussions in the media take me back to one of our first group of neonates in Kamwenge. We had received one donated humidicrib from Australia, and had (at the time) only 1 oxygen pump that could connect to two patients. We had 3 neonates, all who were born very early – a set of twins and another little baby. We encouraged kangaroo care with the mothers (a good practice anywhere in the world!) and then offered them each a certain allotment of hours in the crib each day, hooked up to oxygen. If one of the neonates breathing became laboured, we would switch before the allotted time.

Only 1 of the babies survived.

It was tough. Mostly for the mothers, but also for our staff and for me. I was new to this reality of little babies in little cardboard box coffins being carried back down the winding dusty path away from our clinic, balanced on top their mother’s head. It was my first jarring and bitter taste of injustice, swallowed while the world nonchalantly continued spinning around me.

Ugandans are strong. They are resilient. Despite all the trauma of day-to-day life, they seem to be able to rise up, out of the ashes, time and time again – and keep living. I think the living Ugandans do, despite the uncertainly and all-of-life toughness, is extraordinary. Like someone at work said to me today of Coronavirus and everyone’s fears: “these things come and go…but we push on”.

just for a minute

Think about some of the uncertainty we have faced in the last week. The unknowing. The fear. The confusion around jobs and salaries and school closures and what might happen to the economy. The distrust that the government has our back, that there will be enough food and toilet paper and resources to go around. That our health system (for once in our entire life time) may not be able to cope if Covid 19 swallowed Australia as it has done to parts of China and now Europe.

And imagine, for a minute, that life was always like that.

This fear and risk we are swimming in is a glimmer of what the world’s poor are accustomed to every day. And when Coronavirus hits Africa – there won’t be many ICU beds and I doubt there will be flattened curves to ensure health systems can manage. There will be lots of people with underlying health issues such as HIV and malnutrition, and, well, poverty. But alongside all of this there will be the indestructible human spirit that Ugandans seem to possess in droves.

But may I ask something of you? Instead of fearing for ourselves and running to the shops to stock up – lets use this temporary suspension of the norm to put ourselves in the shoes of those whose lives are always uncertain – and remind ourselves of what we normally take for granted.

And despite the mounting economic pressures and the looming recession, let’s be generous. This world needs generosity now more than ever. Extend generosity to those around you, to those vulnerable in our own communities, to those who find themselves unemployed currently – yes.

But also to the multitudes of not-for-profits around the world (Maranatha Health included!) who are on the front lines fighting for a more certain world for those who have never tasted it.