There have many funny moments since moving to Kamwenge, many of them brought to us by our newly acquired chickens. When we rented this home, the chickens were a part of the package deal, and we share them (and their eggs) with our neighbours. I was naively excited at first, assuming there would  be no effort required in caring for them, other than throwing our food scraps their way occasionally and collecting the free range eggs each morning and evening.

I think naive was the key word.

I’m not sure if these chickens are ‘normal’ chickens as I have never had the privilege of having my very own chickens before. However, in my previous life in suburban Adelaide, my limited understanding of chickens was that they were outside creatures, content in the great outdoors and only needing to huddle in their huts at night for some shelter.

In contrast to anything I previously believed to be the case with chickens, my chickens want to be inside.

It is somewhat disturbing. I first got an inkling that my chickens were ‘odd’, when I  walked into the kitchen one day to find the chicken had wondered in the back door, flown up on the bench, and was sitting on the eggs. I don’t quite know why, or how, or for what reason. Perhaps it had difficulty letting go of its babies/eggs. When I tried to get the chicken out of my kitchen, it proceeded to get stuck in the window. 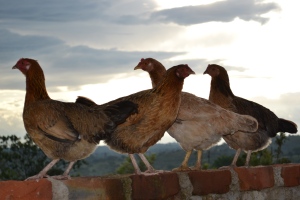 My strange chickens lined up on our fence

Since then, the chickens have continued to make us question if our house is actually the setting for an old Alfred Hitchcock classic. They have attempted, every day, to get inside our house. Sometimes it is through an almost closed window (onto our inside clothes line where it squawks in shock while swinging aimlessly). Sometime it is through the back door, a line of 2 or 3 that wonder in sheepishly, waiting for the sound of my voice before they quickly toddle out again. Or one in particularly that tries every day to enter our front door. We put up boxes and other items to block that thing out but it refuses to give up. I wanted to use positive reinforcement but Michael has taken to the technique of splashing the chicken with water if it tries to enter.

But I shouldn’t be too harsh. One can learn a lot about life and culture, from one’s chickens. In Uganda, they have 2 ‘types’ of chickens, ‘exotic’ or ‘Mzungu’ (European) chickens, and ‘local’ chickens, as they are known here. The differences are striking and I thought I would share them with you. Take from it what you will:

The mzungu chickens are soft. They are plump and healthy looking, but they are fairly hopeless at getting on with the business of survival. They need to be fed good food, every day, as they really struggle to catch or look for food themselves. They need some luxury’s and lots of looking after but if they get it – they will be very industrious, producing many eggs in a day.

In contrast, the local chickens are scrawny but tough. They work hard to find their own food, they need almost no pampering, and they are very resourceful. However, when it comes to laying eggs, it is a different story. One is lucky to find them laying even once in a whole day.

So far, I have not tested this hypothesis on many chickens, but just observed it in the ones I have and the detailed explanations I have received from Ugandans and Mzungu friends. Interestingly, the eggs from the local chickens are much better/tastier than anything the mzungu chicken can lay. Hmmm.

I will let you know how the experiment unfolds…

Posted in Kamwenge life, Things that make me laugh